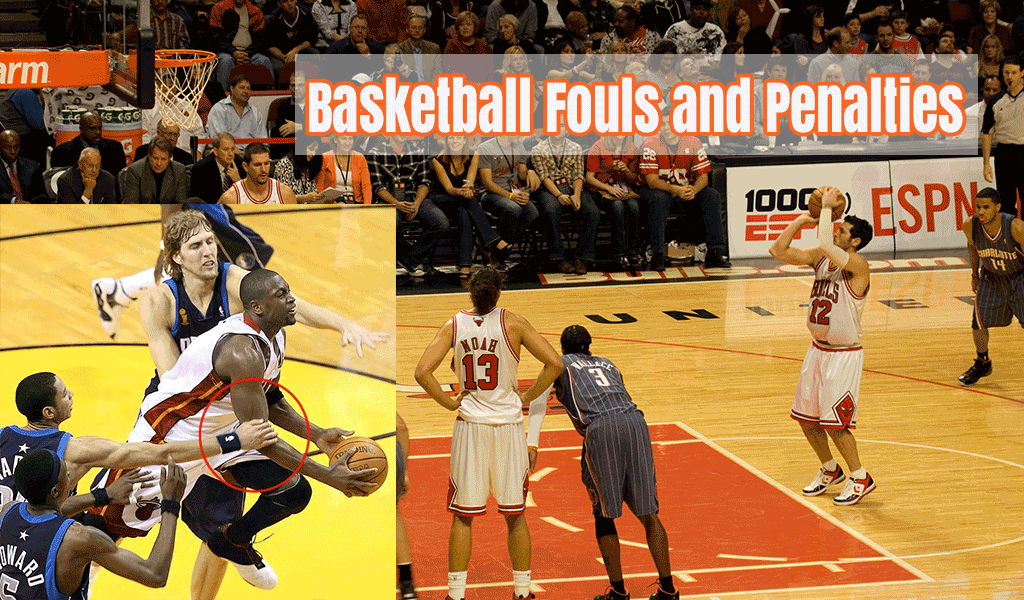 Any kind of illegal attempt is termed as foul, and as compensation for each foul, the opposing team gets a penalty.

When two teams compete in the game and want to score points one after another, sometimes unintentionally (and often intentionally)they break the law of fair play policy. Though fouls are unexpected and cause penalties, they are also part of a fair competition.

Here we will discuss some common fouls and penalties against those fouls in basketball. However, as a player, you should try to keep yourself always far from committing fouls and getting penalties.

If the situation is that foul is committed on a player but the player is not shooting the ball, then inbounds foul is whistled and a penalty is given.

As a reward, sufferer team acquires the ball at the nearest side of the baseline or side out of bounds, then the team gets only 5 seconds to pass the ball to the players.

In a particular game, each team is allowed to commit seven fouls. If a team commits more than seven fouls, the player of the rival team on whom the foul was done, is awarded a free throw. In extension, if the player able to basket the ball successfully he obtains another free throw.

Seven fouls are allowed for a game.  But unfortunately, if a team commits ten fouls in a game then for every foul after the tenth one, the player who has been suffered by foul is rewarded with two free throws.

Unlike before one, it doesn’t matter whether he was able to score from the first throw or not, he completely gets two individual throws.

A player even a coach can be surged for technical fouls.  This kind of foul doesn’t involve players physical contact or the ball, it’s all about the violation of in-ground and out-ground manners. Major signs of technical fouls are obscenity, obscene gestures, foul language, arguing, and other unexpected behaviors.

In high school, the penalty for a technical foul is ball possession for the affected team and two free throws. If a coach or player commits two technical fouls in a game, he will be ejected.

It’s an offensive kind of foul, which is committed when a player pushes or runs over a defensive player.  As a penalty, the possession of the ball is given to the team that the foul was committed upon.

hitting, kicking, and punching are the reasons behind calling the flagrant fouls. This type of fouls gives the opposing team an opportunity of a free throw and the possession of the ball after the free throw.

If a player makes intentional physical contact with another player with no reasonable effort to steal the ball, termed as an intentional foul.  In this case, the coach doesn’t have any right to decide the penalty, it’s a matter of judgment for the higher officials. Here the player receives different degrees of punishment depending upon their misbehavior.

Well, fouls are part of a game, but sometimes they can become the reasons behind the defeat of a team as well.

So, whenever you play basketball, you should be aware of committing any kind of foul. If you play the defensive role for your team, you should pay extra attention to it. You can also follow some tricks that will enable you to stop/defeat your opponent players without committing fouls.